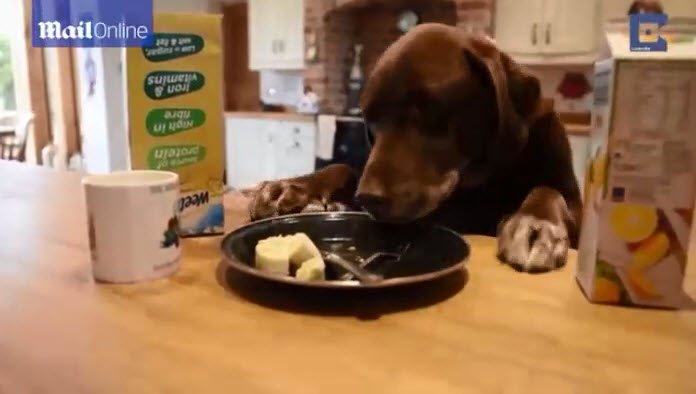 Giving up trying to safe Rollo from eating himself to death what options remained?

Meet Rollo the nine-year old food obsessed chocolate Labrador retriever who managed to raise food scavenging to a whole new level by combining the power of his intelligence and the driving force of his eating disorder. His “hungry” mind made Rollo into an unstoppable burglar who had no trouble at all opening the kitchen’s many storage areas such as drawers, cupboards, the fridge and even dirty plates and cups could not be kept safe from the labs licking tongue as breaking and entering the dishwasher was childsplay to him.

The owners of this lovable Lab had surrendered their attempts to combat his food obsessive behaviour some time ago and were almost ready to accept defeat but then came up with a whole new strategy to beat the smart Labrador at her own game and rather than wasting their efforts on trying to cure his food disorder they decided to focus on prevention instead.

The learned Labrador already had showed his knowledge of how to open the locks on all the doors and drawers in the old kitchen so they decided in favour of having installed a completely new kitchen specially designed to keep the ever hungry dog out.

Well for a short while it looked that way but Rollo decided two could play that game and quickly changed his scavenging grounds from the kitchen to the outdoor area starting to ravage the family’s apple trees – using a trampoline to get to the fruits, would you believe it – and breaking into the greenhouse to feast on the tomatoes.

With this turn of events the food obsessed and overly intelligent chocolate Lab leaves the owners to figure out their next move.

Can’t wait to hear from them again…

The following was first published on www.akc.org

and tomatoes are safe for dogs to eat, the stems and leaves (and seeds in the apples) are toxic. Also, Rollo has gotten into rat poison and other dangerous items, requiring veterinary intervention. According to the Daily Mail, Rollo had been relinquished by three previous owners because of his persistent binging.

“Never leave food on a counter for a dog to find. Once they find a big food “prize” within reach on the counter or table, this can set them up for a lifetime of getting on the counter to find another enticing goody.”

“Second, supervision and containment are both very important. When your dog is loose in the house, keep an eye on what he is doing so you can stop him from getting into mischief and block access with a baby gate.

will also be very beneficial. This keeps your dog and your house safe when you cannot supervise. Leave a goody with your dog in his crate (like a hard hollow rubber toy stuffed with peanut butter), and he will be content until you get home.” (

Rollo’s owners, Sue Kirk and Stewart Maher, took a different route to solve the problem: They put in a whole new kitchen, including cabinets and a new fridge with dog-proofed handles, all to the tune of about $38,000.

, and had even used a trampoline to get apples off of the apple tree on the property and had thrown himself into a gate to break into the greenhouse and eat the tomatoes.