Apparently the proof of this “pudding” was not in the eating

Compared to the definition of the term junk-food as given by Wikipedia what this Lab devoured we can’t call junk-food, see below, but one can hardly deny her eating habits to be of a junkie like nature…

According to Wikipedia the definition of junk-food is:  food containing high levels of calories from sugar or fat with little protein, vitamins or minerals. Use of the term implies that a particular food has little “nutritional value” and contains excessive fat, sugar, salt, and calories. Junk food can also refer to high protein food containing large amounts of meat prepared with, for example, too much unhealthy saturated fat; many hamburger outlets, fried chicken outlets and the like supply food considered junk food. 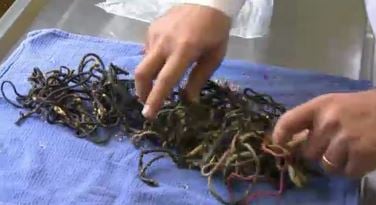 When the Lab’s owner took her to the vet because she noticed her dog’s sudden loss of appetite it quickly became clear there was something else going on but  X-rays of the dog’s stomach were needed to bring the real problem to “light”.

It took two hours of intensive surgery for the vet and his technician to remove all swallowed items from the dog’s digestive system, there first response ” We were shocked at the items that were pulled out“.

In total 62 hair bands, eight pairs of underwear and a bandage were retrieved from the dog’s stomach.

The Next Page holds the video of the (un)lucky Lab

[VIDEO] The Real Danger That Lurks in the Woods